A romantic wedding for two. Michael & Christina came to Cyprus from Israel. Their wedding was held at Paphos Town Hall. After the marriage ceremony photos were taken outside the Town Hall, Aphrodite Hills golf resort and also at Aphrodite's Rock.

Mary & Itai came from Israel to get married in Cyprus. Their small marriage ceremony was held at Paphos Town Hall. After the marriage ceremoiny, photos were taken in the ground sof the Town Hall followed by a romantic (and fun) photo session at Aphrodite's Rock. 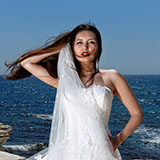 My husband & I cannot express in words how grateful we are that we had the pleasure of Mandy arranging our "Marriage Vow Renewal Ceremony". The villa venue was just divine. The ceremony bought tears to both my husband and my eyes and my cream rose bouquet was beautiful. If you are wanting a professional and caring wedding planner, then make contact with Mandy of Dream Villa Weddings. You will not be disappointed.
Charles & Helen 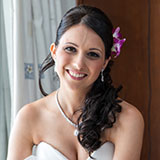 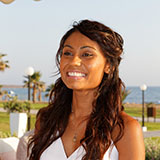 Hi Dino, We just watched the video. WOW!!! It’s amazing. So glad we booked Dream Villa Weddings for our wedding. We couldn’t be happier with absolutely everything. Thank you and your team so much for such an excellent job. Lizz is in tears watching the video. You were all so professional and made us feel so at ease throughout the whole day. Thanks Dino.
Louis & Liz 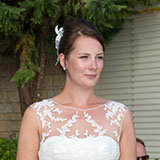 My husband and I got married at Villa 14709 in Paphos. Not only was our stay amazing, our wedding was perfect. Mandy is their amazing wedding coordinator, who was professional and friendly. It was so easy organising my wedding through Dream Villa Weddings. My husband and I cannot wait until we return for our anniversaries. Best wishes
Karim & Nicole 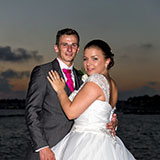 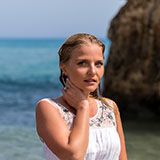 A big thanks to Mandy and the Dream Villa Weddings team to make our day beyond what we expected. Everything was more than perfect and we will surely never hesitate to contact them again for any similar event. We highly recommend Dream Villa Weddings to make your wedding dreams come true. All the best.
Michael & Christina 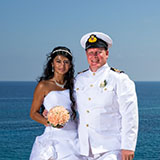 Dream Villa Weddings have just been absolutely amazing!
Our wedding planner, Mandy, went above and beyond from day one.
They answered our one million questions and we're always happy to assist.
The wedding itself went smoothly and couldn't have asked for a more perfect day on our wedding day. Thank you so much!
Steve & Gurbash 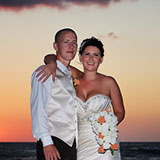 Impossible to put into words how much help Mandy and the team from Dream Villa Weddings were. If like us, you are trying to organise a perfect celebration in Cyprus, then you will be in safe hands with Dream Villa Weddings. They use top service providers who truly deliver on what they offer. The things the team did are too many to mention and we are ever so happy we chose them. They are also flexible and put up with us changing the menu, allowed us to bring our own drinks in and hire staff to serve. Highly recommended.
George & Jenna 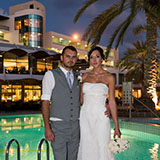 Dream Villa Weddings made our wedding day absolutely amazing. Not only did they made it stress-free for us, but they were also able to make the ceremony and reception exactly as described. Our wedding planner, Mandy, is very knowledgeable and detail oriented. One thing I must say is to trust them, they really know what they’re doing. The photographer & videographer team are simply awesome. Thank you for making such a Beautiful and Amazing Wedding come true for us! All the best!
Kevin & Lisa 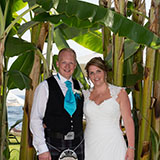 I couldn't recommend better people to work with than the team at Dream Villa Weddings! Our wedding was better than I ever imagined and it was because of the great work they did! I cannot thank you enough! You guys seriously have us the wedding of our dreams! Mandy is one in a million and so calm in all the stress, just what a bride needs! Thanks again!
Frank & Marge 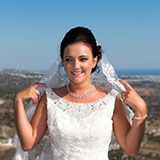 Thanks to the wonderful team at Dream Wedding Planners, our wedding in Paphos turned out to be everything we wanted and more. Everything from the decorations, flowers, table settings, song playlists, agenda of the day, guest arrangements and more were arranged so seamlessly and wonderfully; I didn't have to worry about a single thing. All my requests big and small were accommodated, as they understood it is our big day and it is of utmost importance it goes according to how we want it to. If you need a professional team to look after your wedding in Cyprus, look no further than the Dream Villa Weddings!!
Russel & Iryna 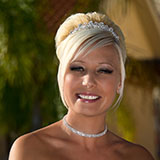 To say that we can't imagine our special day without Mandy and the Dream Villa Wedding team is an understatement! We worked with Mandy for over a year and a half planning our wedding. We had many personal requests from our side as we really wanted to personalise our experience for both ourselves and our guests. Mandy always did the very best she could to accommodate us. On the day of our wedding, we were both quite nervous but they always did a great job of assuring us that everything would flow smoothly and.. WOW, did they exceed our expectations!! All of our guests commented that it was one of the best weddings they ever attended and that they really enjoyed themselves and our event. Thank you again for making our dream wedding come true!
Phillip & Rebecca 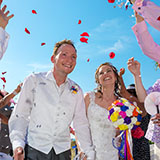 We worked with Mandy from Dream Villa Weddings for over six months in the run-up to our wedding. Mandy continuously exceeded expectations with her knowledge, can-do attitude (always with a big smile on her face), and excellent coordination expertise. She consistently delivered our needs swiftly with high levels of accuracy; playing a significant role in making our wedding spectacular and perfect in every way. Mandy also worked exceptionally well under pressure and handled everything expertly with quick actions. Feedback from our guests have been extremely positive, and we are delighted with how our wedding turned out. We can highly recommend Dream Villa Weddings and thank you once again for playing a part in making our dream wedding come true.
Luke & Hayley 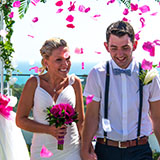 An Unforgettable Villa Wedding in Cyprus! First off I would like to THANK Mandy and her team for all their patience and dedication Our dream wedding wouldn’t have become a reality without your passion for what you do! The staff was amazing to work with and accommodating to our last minute changes before the wedding day, with that said everything went above and beyond what we had imagined, our family and friends are still talking about the magical wedding that they witnessed and the dinner reception party that will never be forgotten! THANK YOU to the wonderful staff at Dream Villa Weddings! Hugs & Kisses.
Tom & Vanessa 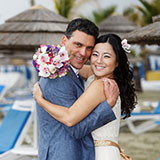 Dear Mandy, I hope you are doing very well. I have come back to Canada yesterday, so I just have the time to write to you in order to say thank you! Thank you so much for all Dream Villa Wedding’s team's for all your kindest help these days to make my dream come true. Everything of the day was so fabulous and just like we expected. You guys are so professional and helpful. I so appreciate I chose your team as my wedding planner. Best wishes to you!
Lee & Victoria 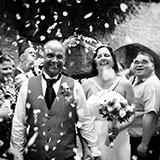 On behalf of my husband and I, we would like to say a huge thank you with all our heart's to Mandy and her team who seriously did pull off the most fantastic wedding ever at our beautiful villa in Paphos. Everyone who attended was so overwhelmed at how just beautiful and perfect everything was. You planned and arranged everything in such fine detail. It was the most magical, beautiful best day of our lives. We couldn't recommend you highly enough for any future couples wishing to get married in Cyprus. You made the wedding of our dreams. Thank you again from the bottom of our heart's xxx
Michael & Jilly 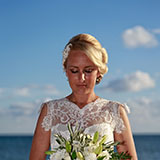 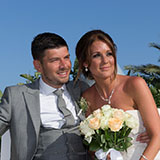 Hi Mandy, How are you? Sincerely from the bottom of our hearts, the experience we had with Mandy and her team was nothing short of extraordinary. Warm, kind, and always wanting to please us, are only a few words to describe the effort and dedication they emit from their hearts. From table settings to meeting the staff, everything went incredibly smooth and painless. They made the happiest moment of our lives, the most memorable. With love and endless thanks.
Daniel & Sophie 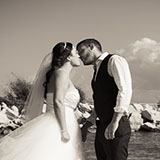 We recently got married at Villa 14709 in Paphos, and Mandy was our wedding planner. Mandy and her team at Dream Villa Weddings were very organised and accommodating. They worked extremely well and made sure that our big day was nothing less than perfect! We would hands down recommend Dream Villa Weddings! From my husband and I, I would like to say a big thank you to Mandy and her team. You made our dream wedding a reality.
Terry & Karen 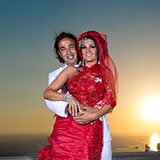 Everybody had such an excellent time when they were in Cyprus. Most of them are back now, and everyone from work keeps talking about how amazing it was. The villa was beautiful (even better than it looked in the pictures) and the wedding was amazing! A big thank-you for being there on the day to make sure everything went smoothly. Thank you so much for everything.
Greg & Anita 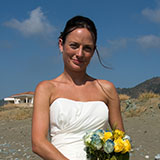 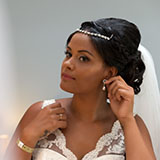 We can't thank you enough for all you have done during our wedding. The villa was amazing and your service has been exceptional and the tradition barbecue was delicious. It has been a joy to share our special day with not just our close family & friends, but also with your team. We can tell you really cared about making everything perfect for us, and it was. All of our guests have said they feel the same. We will be back and look forward to seeing you when we do.
Martin & Jillian

Learn More About Us